We are dedicated to providing excellent care. Call us to learn more.

Pet vaccinations are an important duty of every pet owner whether you have a dog, a cat, a rabbit, or any other animal. It is deeply regulated by law not just for the benefit of the animal but also people within the animal’s vicinity. You probably already know of the rabies virus which can infect humans and cause irreparable harm when not properly treated. With the right vaccine however, rabies is easy enough to avoid.

Cats and dogs are prone and exposed to varying types of health problems – which is why their pet shots are significantly different from each other. In this article, we’ll talk about the cost of vaccinations and the ideal shots your cat or dog should have during their lifetime.

Note though that before any shot – both cats and dogs should first be dewormed, done as early as 2 weeks. Deworming may be done through the vet or you can purchase a dewormer to handle the task yourself. Deworming is best done before any shots because the worms may absorb the vaccine instead of the dog. 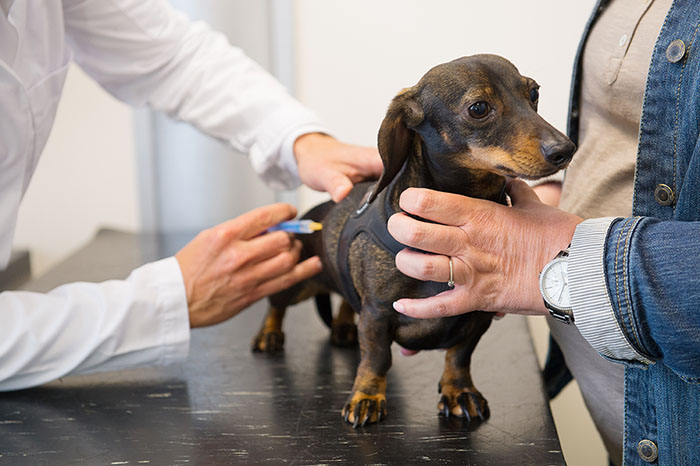 Dog shots start as early as 6 weeks. This is the time when the puppy gets his first 5-in-1 or 6-in-1 shot to help prevent certain health issues, the most common of which is Parvovirus. As the name implies a “5-in-1” shot lets the dog enjoy protection from 5 types of health problems in one single vaccine.

Here are some of the most common health issues attacking dogs and how they can be prevented through shots.

Parvovirus is perhaps the most fatal virus for dogs – often hitting puppies more than adults. A dog with parvo vomits consistently and suffers from diarrhea – quickly weakening the canine. Vaccines for parvo should therefore be administered as early as 6 weeks and in 3 doses with 2 weeks in between each dose. After 1 year, a booster parvo shot is administered and after that, boosters should be shot at least every 3 years. The parvovirus is one of the health problems prevented with a “6 in 1” shot.

Another of the health issues prevented through a “6 in 1” shot, distemper is an airborne virus that can cause a host of problems. At its worst, the issue can lead to permanent brain damage in dogs. Puppies are most vulnerable, thus the need to administer the shots early on. A total of 3 doses will be given every two weeks once the puppy hits 6 weeks of age. After this, 1 booster shot will be given when the puppy turns 1 year of age.

Included in the 6 in1 shot, parainfluenza is characterized by coughing and fever in the dog. It can be problematic for puppies, but not exactly a serious condition, especially for adult dogs. Hence, it’s not a core-vaccine for dogs, but it helps to have it as part of canine vaccination. Parainfluenza is often associated with the Bordetella virus or kennel cough. Kennel cough linked to Bordetella is not part of the 6 in 1 vaccine and not considered serious. This is to be differentiated from ‘kennel’ cough resulting from Adenovirus which is a core vaccine.

There are two types of Adenovirus and unfortunately, the vaccination for these two is administered separately. The first type is known as Canine Hepatitis and considered a core vaccine for dogs. Hence, it’s typically part of the 6 in 1 shot given to pups at 6 weeks. The second type (Adenovirus 2) is also a core vaccine and goes by the name of “kennel cough” different from that of Bordetella. This is also included in the 6 in 1 shot.

Another vaccine administered in the 6 in 1 is meant to prevent leptospirosis. This is not a core vaccine for dogs but will definitely help prevent severe skin problems for the pooch. The condition can lead to extreme discomfort for the pup followed by the shedding of fur and bald patches. The cause of the condition is usually exposure to a certain environment – specifically to rodents and stagnant water.

The antirabies shots are administered as early as 3 months old. Note, however that the timely administration is regulated by the state so it might be earlier or later. In most cases, rabies is administered after other vaccination shots. However, this doesn’t mean that you can’t administer antirabies alone. Of all the dog vaccinations, this is by far the most important. Rabies has no cure so prevention is the only key. Worse, it can affect people through dog bites.

Other conditions requiring one form of vaccination or another are listed below. The chances of your dog having these depend largely on their environment: 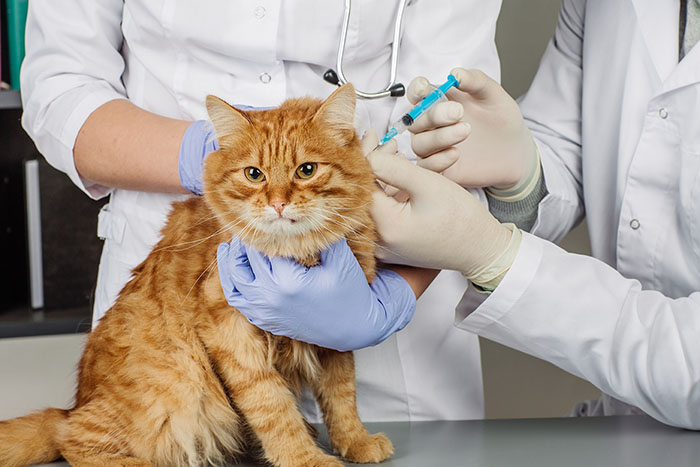 Vaccination schedules might seem confusing, but that’s not the case at all. What you need to remember is that even with several possible health issues, all of these are solved through single shots. Here’s a breakdown of pet vaccine administration.

After the booster shots, you have the option of coming back every 2 years or 3 years, depending on what’s comfortable for you.

Aside from rabies, the core vaccines for cats are marginally different than those of dogs. Rabies should be administered as early as 12 weeks, typically after all the core vaccines have been given. Here are the health problems that are prevented through core vaccines:

The cat equivalent of distemper, this should be administered as early as 6 weeks, the same with dogs.

Rhinotracheitis is characterized by frequent sneezing in cats. Despite the vaccine however, you should know that it doesn’t completely prevent the condition. In most cases, the vaccine simply lowers the severity and length of the problem.

Another condition addressed through a core vaccine, all three of the health issues previously discussed are part of a combination shot given to cats during their earlier months.

Depending on whether your cat is indoors or outdoors, vaccines must also be given for the following conditions:

For best results, cat vaccinations should be administered after deworming. As with dogs, booster shots are given after 1 year and again every 3 years.

Dog vaccination schedule and costs are pretty much the same with those of a cat during the initial stages of the pet’s life. As the dog/cat grows older, he’ll need fewer vaccinations and therefore will cost less over the years. Here are the average prices for vaccination:

For cat owners, set aside roughly the same amount for vaccinations. Note that the estimate includes only core shots. Additional non-core vaccines will be separately billed.

The veterinarian is often tasked with giving you the dog or cat’s record after the initial shot. The record will contain pertinent information such as the dog’s name, owner’s name, date of birth of the pooch, breed, the vaccines administered, and the date of administration. If you intend to deworm your pet yourself, it’s also a good idea to write this down on the record, as well as the date of deworming and the name of the medicine you used for the job. Outdoor cats and dogs should be dewormed more often than indoor ones. Make sure the record is kept up to date at all times since your veterinarian will use this as a reference in the event of any health problems with the pooch.

The combination shots for cats and dogs are pretty much the same throughout. However, environmental issues might come into play when considering other vaccinations that are not seen as ‘core’ by the pet industry. This is why it’s a good idea to ask your veterinarian about other recommended shots for the dog/cat given your current location and the nature of the pet. For example, outdoor cats might need Chlamydophila shots. Dog owners living in Florida during mosquito season on the other hand might need Heartworm shots as opposed to those living in colder climates.

It might seem like a lot of work – but you’ll find that guaranteeing your pet’s long and healthy life is worth it!

A healthier, happier pet starts with you. Let us Help You